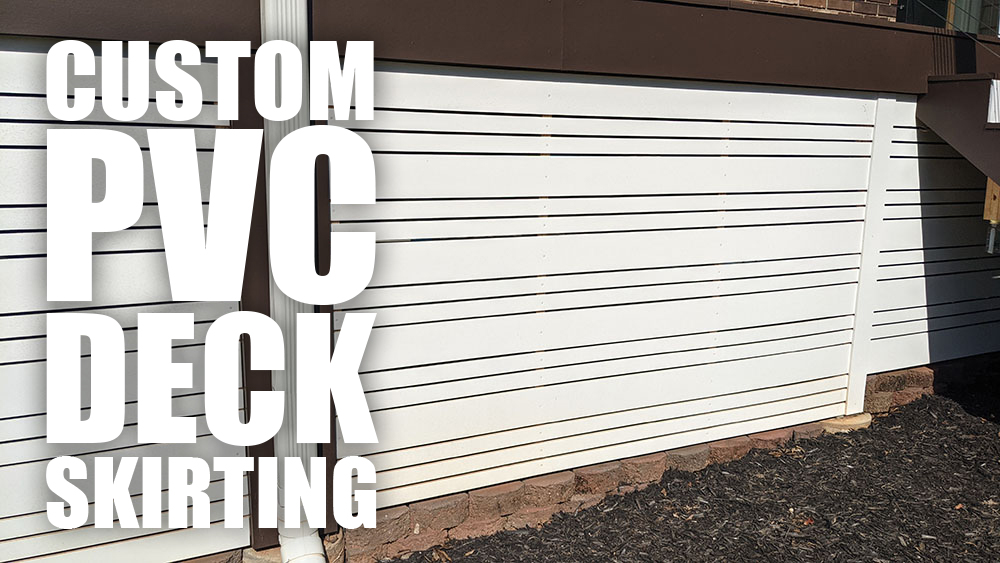 This custom PVC deck skirting is a great modern alternative to the traditional lattice that you can buy at any big box store. Once we came up with the design for the width and spacing of the PVC strips it was a fairly simple project.

The toughest part of this project is actually finding a place that sells the large sheets of PVC material. The brand of the PVC sheets I purchased is Royal Building Products and I was able to purchase them and pick them up at US Lumber. You could probably use the PVC boards that you can buy at the big box stores, but they are more expensive and twice the thickness. If you can find the thinner sheets it makes it a little cheaper and not as heavy.

Planning the design and layout

You can come up with any design that you think looks nice and fits the space. First, I measured all of the openings that I had to cover. Then I tried to figure out a pattern that would not leave me with a tiny piece at the top or bottom of any of the sections. I was originally considering a pattern with multiple strips at different widths, but ended up going with what you see in the picture. It’s one 5″ piece and then two 2″ pieces.

For the next part, you’ll probably need someone to help you. In order to cut the skirting strips, I ran the sheets through a table saw which is nearly impossible to do without someone to help you. They can hold one side as you hold the other side and guide it through the saw.

I made things a little more complicated when it came to attaching the skirting strips. The chunky deck posts I created were more decorative so I didn’t want to attach the skirting to the front of the posts. I ended up building out little frames using pressure treated wood, so I could put the skirting on the inside edge of the posts. I had stretches of 8 feet in some places so I added additional vertical support for the PVC strips as well in the middle of each section. 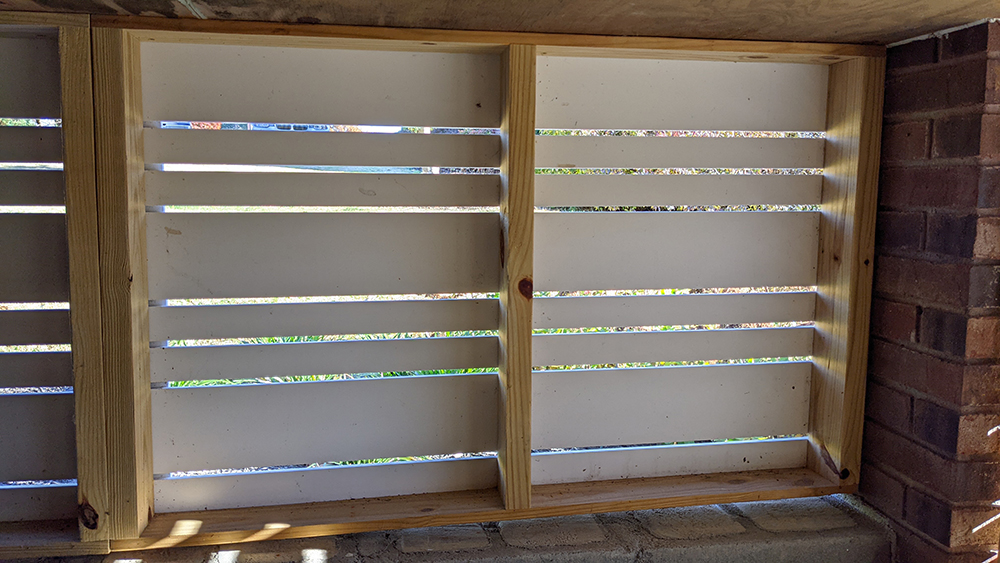 Building and attaching the supports

I built out the supports and attached them to the bottom of the deck and the sides of the posts. I used framing nails to put the framing pieces together. Then I used deck screws to attach them to the deck and posts.

Once I had all of the supports up, I measured the width and cut the strips to length with a miter saw. Once I had enough strips to fill the height of a section I would start setting them and attaching them to the support framing. PVC will expand and contract when the temperature changes, so it was important to space them on all sides. I used a small piece of the 3/8″ PVC to space out the strips. I started at the top and used a level to make sure the first strip was level. Once the first strip was level I could attach the remaining strips below that ensuring they were level. I was able to find small white screws to fasten the strips to the framing. I first drilled a pilot hole and then put the screw in until it was flush with the PVC strip. The PVC is soft so it’s important to not tighten the screws too far. 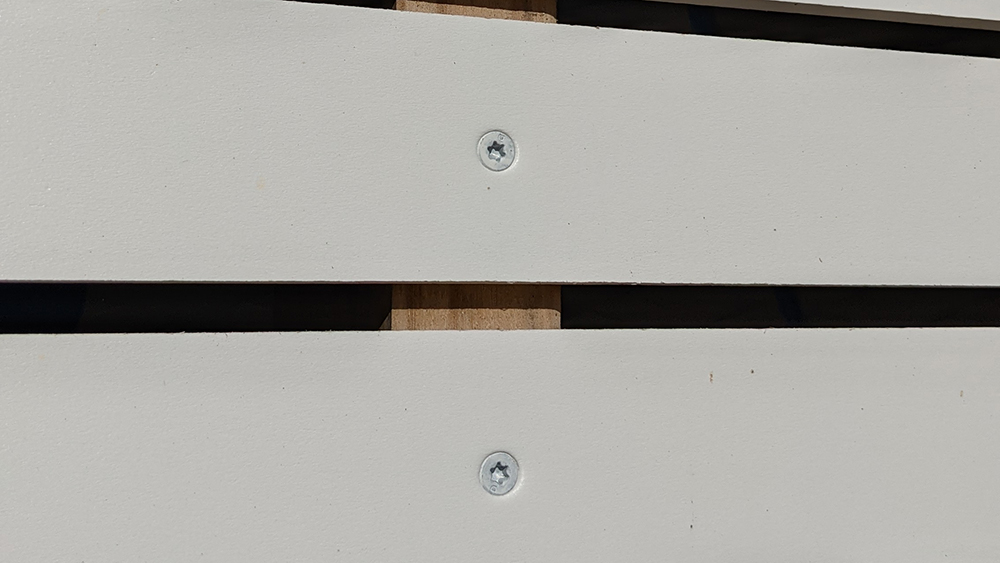 I had a lot of space under the deck that I wanted to make sure we utilized, so I also built these custom gates on the end of the shed and put the same PVC skirting material on them. I feel like they blend in pretty well and they are big enough to drive my mower in when they’re open. The access to my crawlspace is also under the deck, so these gates were a nice addition. 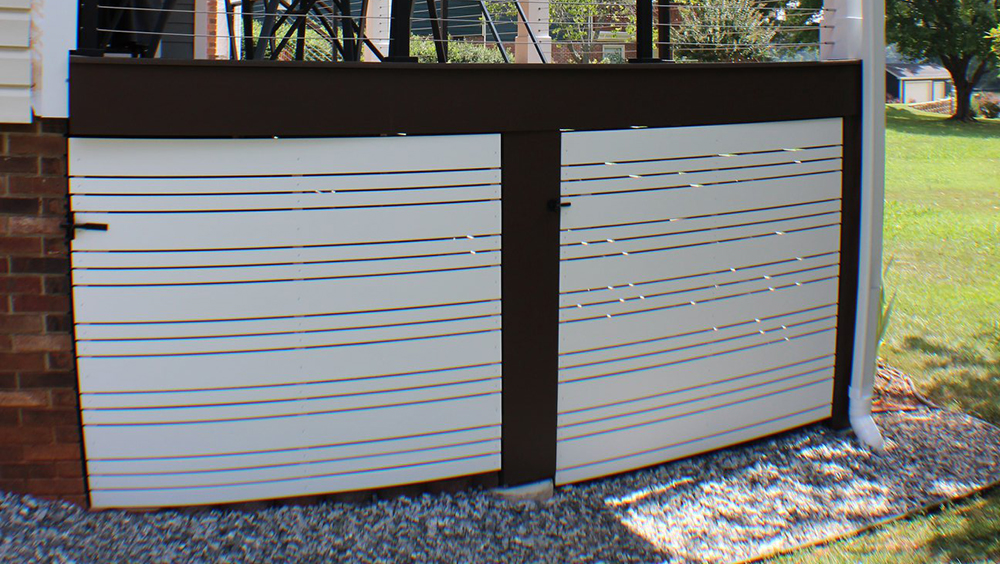 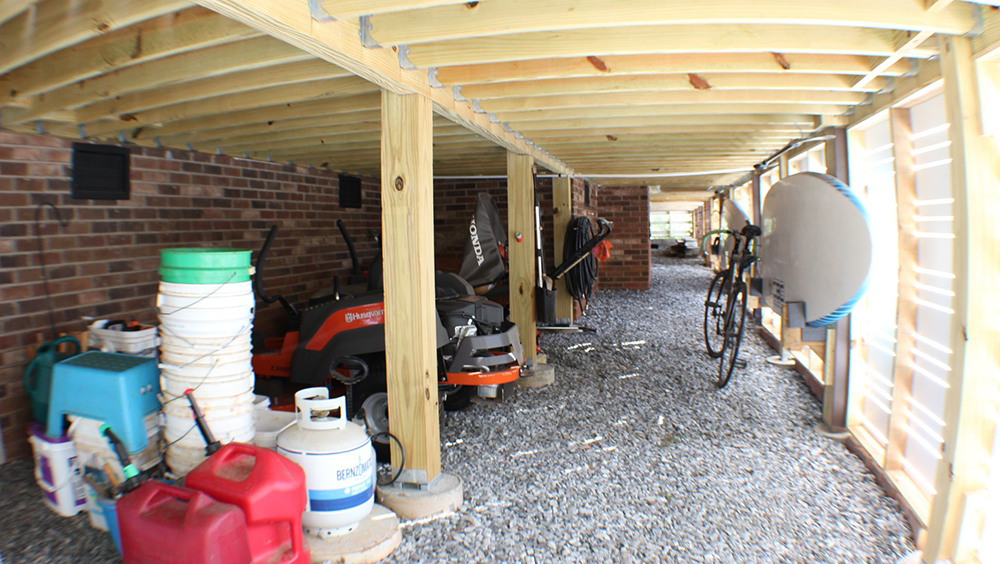 There are a ton of options when it comes to creating your own custom PVC skirting. The design and layout can be whatever you come up with. Don’t get stuck on the horizontal skirting either… You could also try a vertical layout as well!

I really like the PVC because it’s easy to clean if it every gets dirty and it won’t rot. It’s also really light and easy to install. That being said, I think it would look amazing if this skirting was done with wood. Maybe next time!

Interested in adding a custom skirting to your house or deck? Let’s talk!